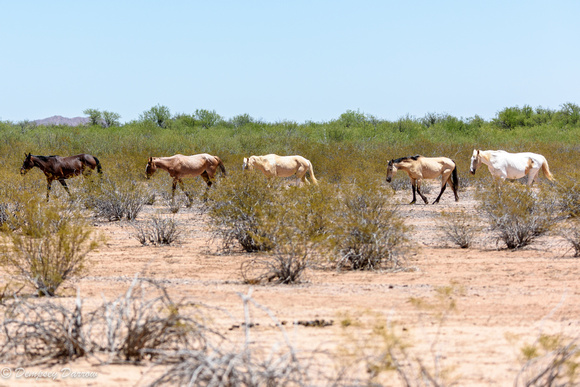 The western portion of Interstate 8 is built along the southern route used during the 1800s migration. Looking out the windshield at the hot, mirage infused desert ahead can be deflating to the spirit. I can only imagine the emotions felt by people when they first saw where they were headed by horseback, in wagons and on foot during the 1800s. It's an area posted by signs warning of the illegal drug and human trafficking coming from the south to rendezvous with waiting vehicles on I-8.

These are wild horses some distance off the Interstate. It's apparent that they're not nearly in the same condition of those found near the Verde River. It was hot, just past midday and they were on the move. You can get a sense of the conditions from the hard, baked ground. The thermometer was passing 100º.
Outrider Perspectives
Powered by ZENFOLIO User Agreement
Cancel
Continue