They were the most isolated band of a major winter encampment along the river of numerous Native American tribal bands, totaling thousands of people. But Custer's forces attacked their village because scouts had followed the trail of a party that had raided white settlers and passed through it. Black Kettle and his people had been at peace and were seeking peace. Custer's soldiers killed women and children in addition to warriors, although they also took many captive to serve as hostages and human shields. The number of Cheyenne killed in the attack has been disputed since the first reports.”

From the National Parks Service Web site regarding the Washita battlefield:

“In February of 1868, [General Phillip H.] Sheridan assumed command of the Department of Missouri and became responsible for enforcing the peace among the hostile Plains Indian tribes. He implemented the "Total War" strategy in the winter campaign of 1868-1869 against the Southern Cheyenne, Arapaho, Kiowa, and Comanche. Sheridan recalled [LTC George Armstrong] Custer early from his suspension to lead the campaign, which was successful in driving the Southern Plains tribes onto reservations. Sheridan's standing orders to Custer were, ‘To kill all the warriors, capture all the women and children, destroy all camps and material goods, and kill all the ponies.’”

The battlefield is, of course, quiet today. Somewhat off the beaten path it’s not overflowing with visitors, which was fine with me when I visited because it left me alone with the ghosts.

The Parks Department provides a documentary film and a verbal history and explanation of the events that occurred there during the frigid winter of 1868. There is a 1.5 mile walking trail with stops and explanations that can be accessed by cell phone.
© Darrow Photography

I couldn't pass up a shot of this sign.

The area is sparsely populated even today. 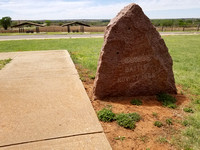 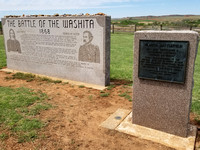 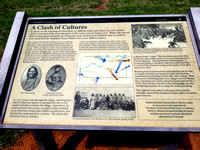 The sign in the previous picture would be where the word "CAMP" is on the map. The picture was taken facing west. 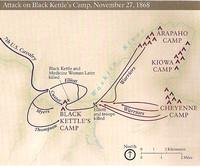 The trees show the location of the Washita from the probable site of Black Kettle's village.

Some of the players in the drama. 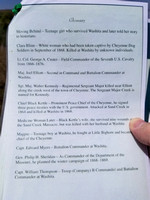 And I did not. The cloths were prevelant among the vegetation along the river. 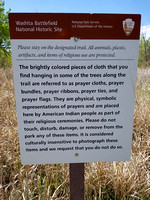